The Rockwell 6S Razor has raised 250% of the campaign's funding goal, and is on track to raise over $250,000 on Kickstarter. The student co-founders of Rockwell Razors attribute their fundraising success to the massive demand for an innovative, well made razor that delivers real value.

TORONTO, Sept. 19, 2014 - A Kickstarter campaign by student-run startup Rockwell Razors was successfully funded in less than 24 hours and is on track to raise over $250,000 according to the Kickstarter tracking site Kicktraq.com. Rockwell Razors' first product is a stainless steel, adjustable razor that uses inexpensive, recyclable double-edge blades. The company mission of "Customize your razor, stop buying cartridges, and reinvent your shave" is clearly catching on.

The co-founders of Rockwell Razors, Gareth Everard, 21, and Morgan Nordstrom, 20, have designed a razor that will eliminate the need to purchase razor cartridges, and will reduce the cutting and burning often caused by modern razors. Their solution is a re-engineered safety razor, which was the popular shaving tool in the 1900's until large shaving corporations began marketing more profitable, disposable razors. Unlike other razors, the Rockwell 6S design comes in six adjustable sizes, so every man can find his perfect shave. "We're thrilled at the response to our campaign" says Gareth, a fourth-year student at Western University. "It's great to see the Rockwell 6S resonate with so many people from around the world, who are rebelling against expensive cartridges and upgrading their shave".

Everyone has unique skin and facial hair, and the Rockwell 6S Razor reflects that. The Rockwell 6S comes with six different shave sizes, which are small adjustments in the angle and gap between the blade and the razor. The smallest size is perfect for men with fine hair and shorter stubble, while the largest size is perfect for men with thick, curly facial hair.

Gareth Everard, a fourth-year science student, and Morgan Nordstrom, a third-year engineering student used rapid modeling to produce a series of 3D printed prototypes of the 6S razor. They refined the design with successive shave-ready prototypes over months before the co-founders reached out to advanced manufacturers to validate their design and launch the funding campaign. You can learn more at http://www.rockwellrazors.com. The Rockwell 6S is available on Kickstarter

Morgan explains, "We think this Kickstarter has exploded beyond our wildest expectations because there is a massive demand for an innovative, well-made razor that delivers real value."

Let our customers speak for us

I’ve used the 6C as my daily shaver, but sometimes wondered if I should have purchased the 6S. I did ultimately purchase the 6S and am glad I did. I have to say the 6C has better glide, however, I truly enjoy shaving with the 6S. Although the glide isn’t as good as the 6C it’s an enjoyable experience in its own right. The 6S is kind of like shaving with Thor’s Hammer, but in a good way. Nary a nick or a weeper with either. I’m keeping both!

K
Rockwell 6C - Double Edge Safety Razor K.
If only my love life was as smooth.

Although the delivery was a little painful, the feel when the razor glided smoothly down my cheeks made up for the pain of the delivery by DHL... and my love life.

I love the performance and quality of this razor. I get a quality shave every single time. I would highly recommend the 6S 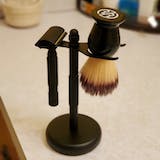 Thanks, the goods are really excellent and have came quickly.

Thanks! The machine is great!

Shop our Canada Store at www.getrockwell.ca